However, the increase in median household income that Puerto Rico experienced between 2015 and 2020 was significantly slower than U.S. average. Between 2015 and 2020 median household income in the U.S. increased by 25.2%, around two times faster than in Puerto Rico.  This lag in income growth compared to the U.S. average could be attributed to the several challenges the Puerto Rican economy faced in the period.  These include the ongoing fiscal crisis, hurricanes Irma and María, the January 2020 earthquakes and the COVID-19 pandemic. 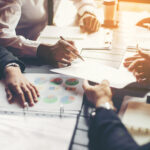 Employment increases by 5.7% in April

Employment increases by 5.7% in April